There are a variety of popular open-source libraries that provide some form of calibration. Each of these provides certain types of projection, distortion, and affinity-like models. However, these are not always the same.

A first look at our pages on projection, distortion, and affinity will set the stage as a good primer on our calibration models and describe some of the immediately obvious differences.

The most immediate difference between the model used by Tangram Vision and almost all popular computer vision models is our use of a single focal length in our pinhole projection model. Some notion of \(f_x\) and \(f_y\) is common in computer vision applications, but instead we opt to model using a single focal parameter \(f\).

Often, the use of two focal lengths in the pinhole projection model is an attempt to model scale differences between the x and y-axes. This is sometimes referred to as having "non-square pixels." In our blog post on the matter, we describe the history behind the problem of "non-square pixels," and how it is more often than not a result of clock-skew inconsistencies between the CCD clock and DAC.

Regardless of the origin of the effect, it can still be observed. Consequently, we often want to model it. Instead of modeling this effect as two separate focal lengths, we instead model it as an affinity correction about the x-axis:

which combined with pinhole projection produces the following model:

Notice that our affinity parameter \(a_1\) is parameterized relative to our image coordinate \(x\), not the object space \(f X_c / Z_c\). This is done for the following reasons:

The latter point is the most important one here. If we are to model this effect in terms of object space, we would instead have a model similar to the following:

This form is quite compact, so let's expand it somewhat:

The important part of this model to take note of is \(f \cdot a_1 \cdot X_c / Z_c\). When estimating \(a_1\) here, we are immediately correlating it with \(f\), which is a difficult parameter to estimate. Not only does this mean that we have a strong projective compensation between \(a_1\) and \(f\), we also introduce a strong data dependency on our target field, since \(a_1\) and \(f\) here are going to necessarily have a strong projective compensation with \(X_c / Z_c\) as well. This model makes it significantly more difficult to produce a robust and consistent calibration.

At present, Tangram Vision only supports pinhole projection models. If you're interested in other forms of projection (orthographic, equidistant, dual-sphere, etc.) contact us and let us know! Doing so will help us prioritize which models to add next.

One the first major differences to consider is what "distortion" we're modeling. Open-source libraries such as OpenCV will model distortion as an additive effect in object space. First, lets look at the general geometry of the problem as follows: 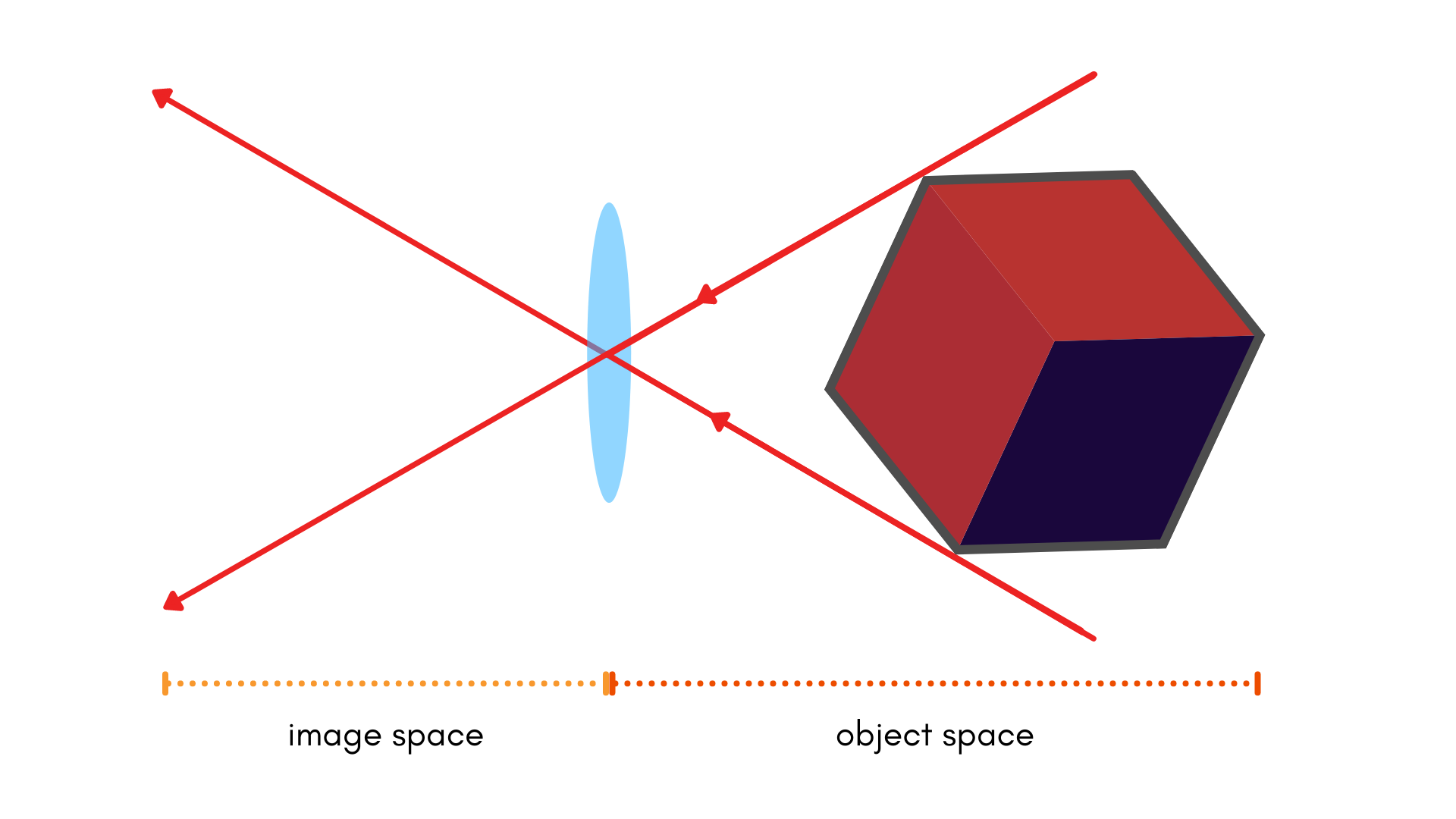 In a pinhole model, distortion appears as if it were a "shift" in the final image coordinates. In the above image, we can visualize radial lens distortion (and the associated "shift") as the orange area. In this initial photo, there is no distortion, because the lines going into our lens (treated as a pinhole) and the lines coming out the other side are entirely straight. Let's look at what this might look like with distortion: 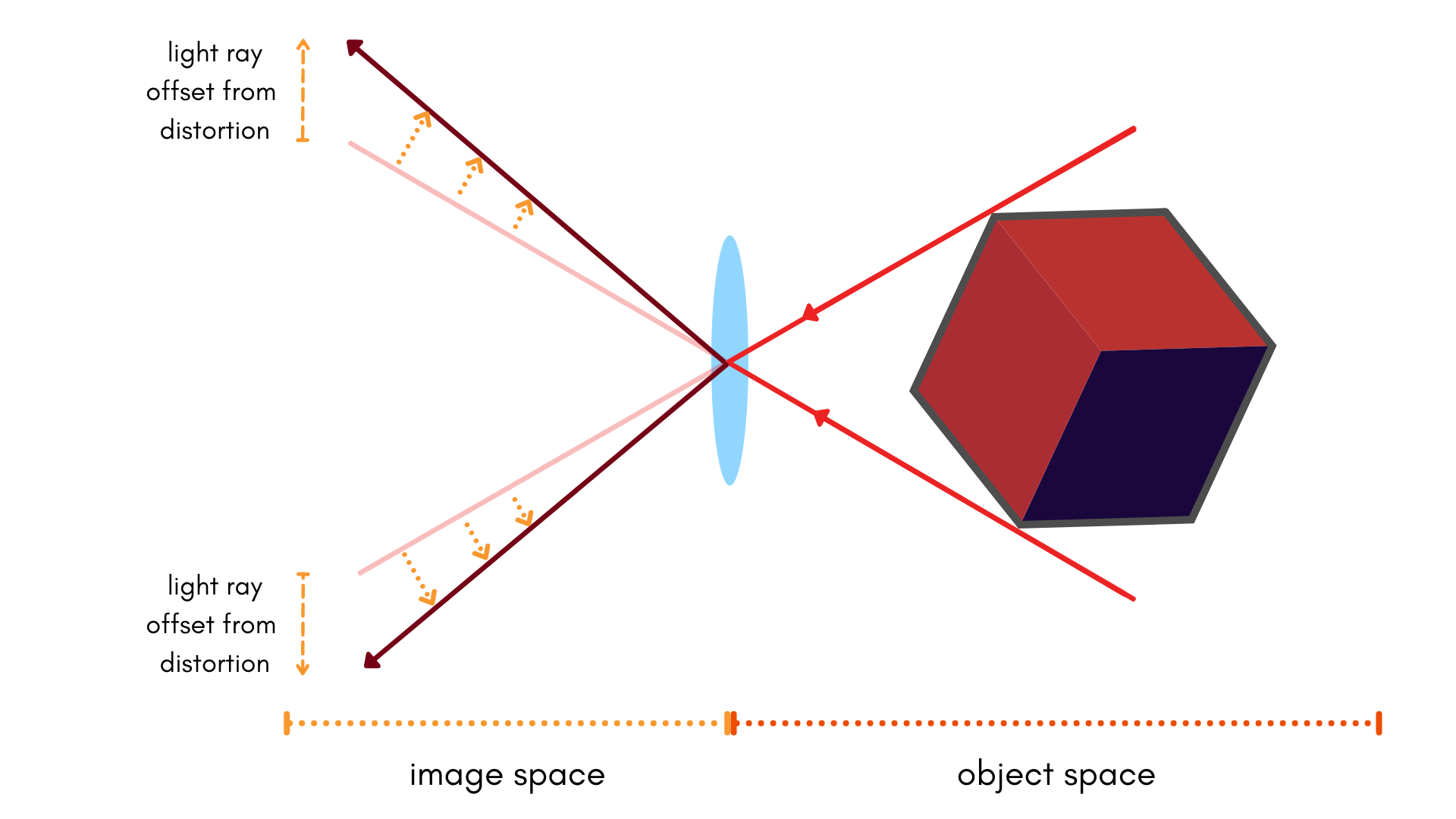 In this image the dotted lines are in the same position they were in the original image. However, the projected position of a point in the image space (left side of the lens) is shifted. This is the effect of distortion.

Now we consider how this is modeled in OpenCV. In OpenCV, distortion is "added" to the perfect scenario. It is parameterized in terms of a change of our object space: 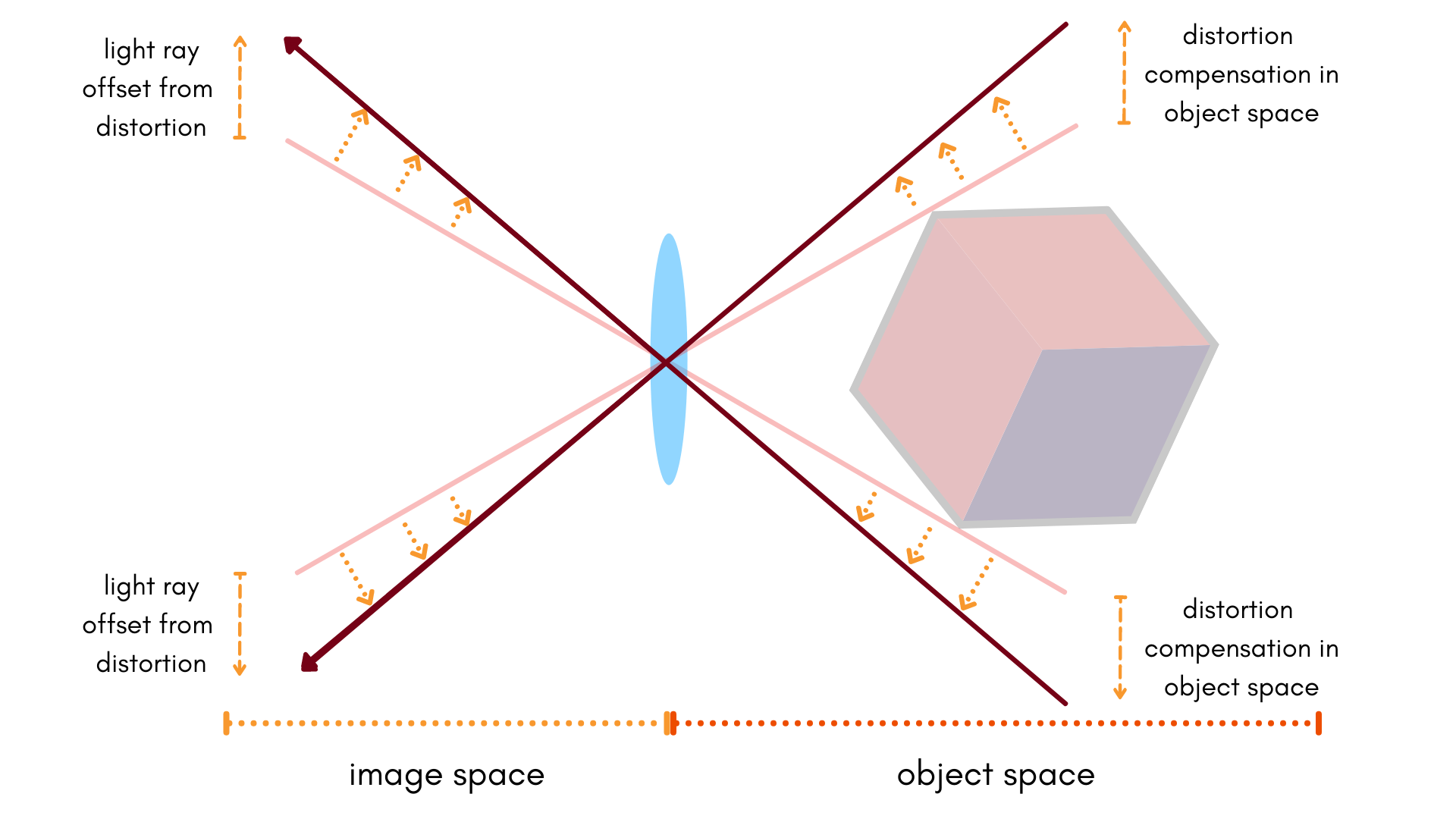 So one can see, the pinhole model is preserved and the lines are thus straight again. From a mathematical point of view, this effectively means that distortions are parameterized by the object space. For Brown-Conrady distortion, this takes the form of:

As was the case with affinity, parameterizing in terms of the object space parameters conflates these parameters with the focal length. This model, which is not what Tangram Vision uses, is a function that maps undistorted points to distorted points.

This has a number of key disadvantages:

In this model, the distorted point locations are what's observable, but the solid lines are the true location. Instead of adding distortion to the object space, the Tangram Vision Platform optimizes for a correction in image space. This takes the following form mathematically:

In this way, rather than modeling distortion as being added to an image (and later undistorting it), we are instead modeling a correction. This is sometimes called the inverse Brown-Conrady model. Intel® RealSense™ even refers to it as such for select models of their cameras in their documentation. In our API, we avoid the inverse terminology for both Brown-Conrady and Kannala-Brandt, but you can expect that both models are constructed in this way.

In addition, these parameters are computed in image space, which makes them independent of other parameters being solved for (excepting \(c_x\) and \(c_y\)). This does mean that we often have to be careful of projective compensation between \(c_x\) and \(c_y\), but by and large this can be mitigated by capturing data with different orientations. See our tutorial on this for more information.

In most cases, you'll just want to apply the above parameters directly to the point coordinates in an image directly to map distorted points from a raw camera frame to undistorted point coordinates. If you are looking to map a point in 3D space and project this back to a (distorted) pixel location, you'll need to generate some form of lookup table or iterative process to do so.

Some software opts to use the "Balanced" distortion profile. A distortion profile that is balanced (as opposed to the normal, Gaussian profile) will ultimately optimize to the same degree of reprojection error, but balances the distortion by adjusting the profile of the distortion curve (the polynomial described by your distortion parameters). This balancing in effect will limit the maximum amount of distortion at a given \(r\) or \(\theta\) within the image (whether you're using the balanced Brown-Conrady or Kannala-Brandt distortions).

The balanced distortion profile does not provide any advantage to the calibration process. Historically, this technique was used to set the upper numerical limit on distortion observed from mechanical stereo-plotters, which had physical limits constraining how much distortion could be observed. This was a great aide for users of these mechanical devices, but no longer makes sense if we're applying distortion parameters numerically with a computer.

The downsides of the balanced profile do exist, however:

OpenCV does in fact still use a balanced profile in their fisheye model. In their documentation, they describe the distortion as:

This is fairly close to what is described by Kannala-Brandt:

As can be seen, the linear component Kannala-Brandt formulation (seen as \(k_1\) in \(g_{\mathsf{KB}}(\theta)\)) does not exist in the OpenCV fisheye formulation. This is the linear component of the Gaussian profile, which is set to 1 in the Balanced profile. Tangram Vision avoids this balancing due to the disadvantages listed previously. Just remember that when using our distortion models, that e.g. our \(k_1\) through \(k_4\) terms may be shifted compared to how OpenCV describes them.