Lens distortions in an imaging system are a result of a camera's lens assembly not perfectly representing the pinhole camera model that we use to relate our world (object space) to our image coordinate system. Lens distortions can be broken into roughly three effects: 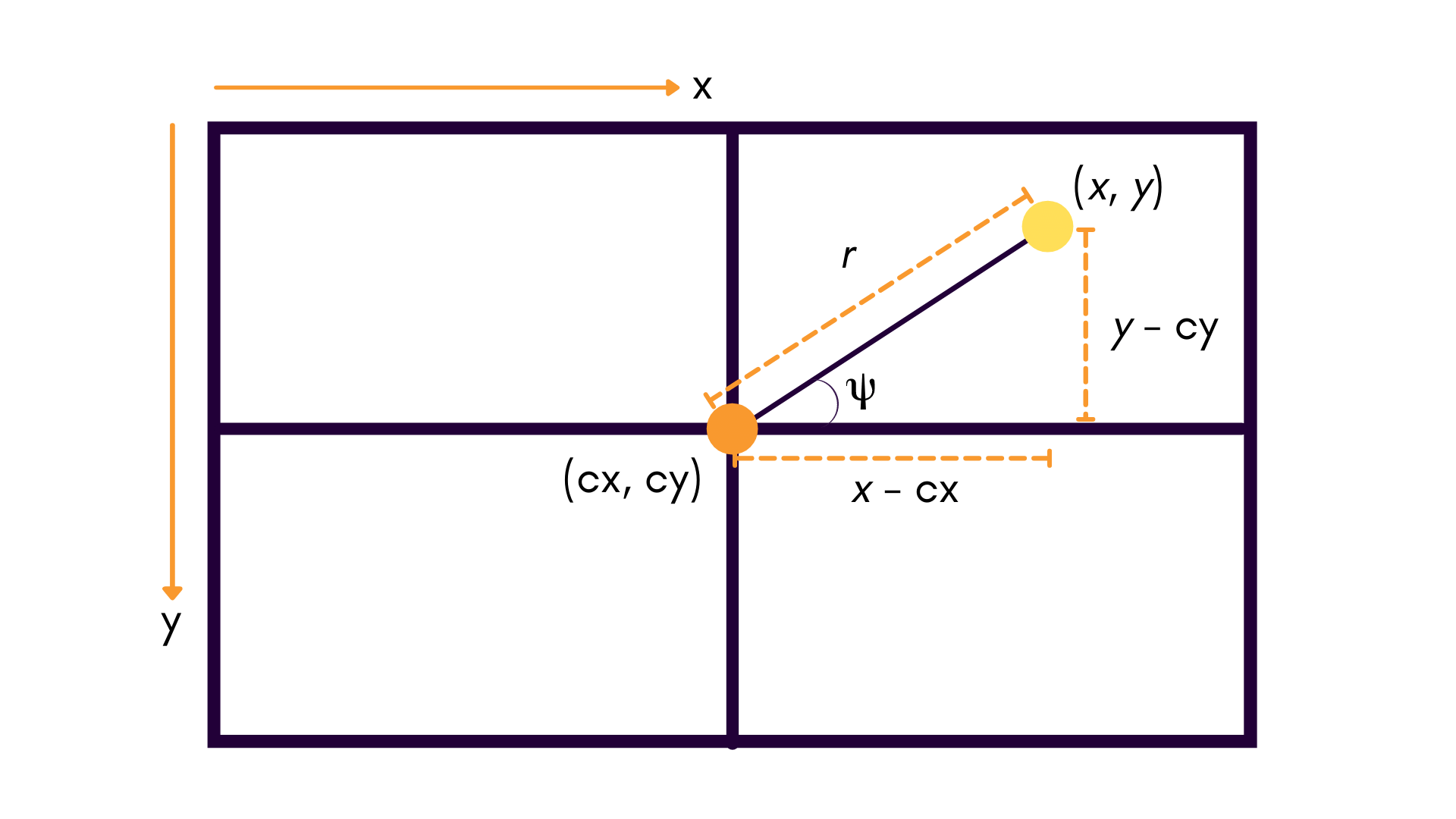 We've written in-depth about camera distortions on the Tangram Vision Blog. See Part 1 and Part 2 of our distortion series for more information.

Brown-Conrady is the typical distortion model used by default in most calibration pipelines. With it, we can model both the symmetric radial distortion and the tangential distortion of the lens:

Radial distortion terms can expand beyond \(k_3\). This would just mean that there are major distortion artifacts near the edges of the field of view. However, This is not usually done in practice; most lenses are manufactured well nowadays, and more terms aren't necessarily needed for an accurate model.

Based on these definitions, the radial distortion terms are often simplified into \(x\) and \(y\) components: 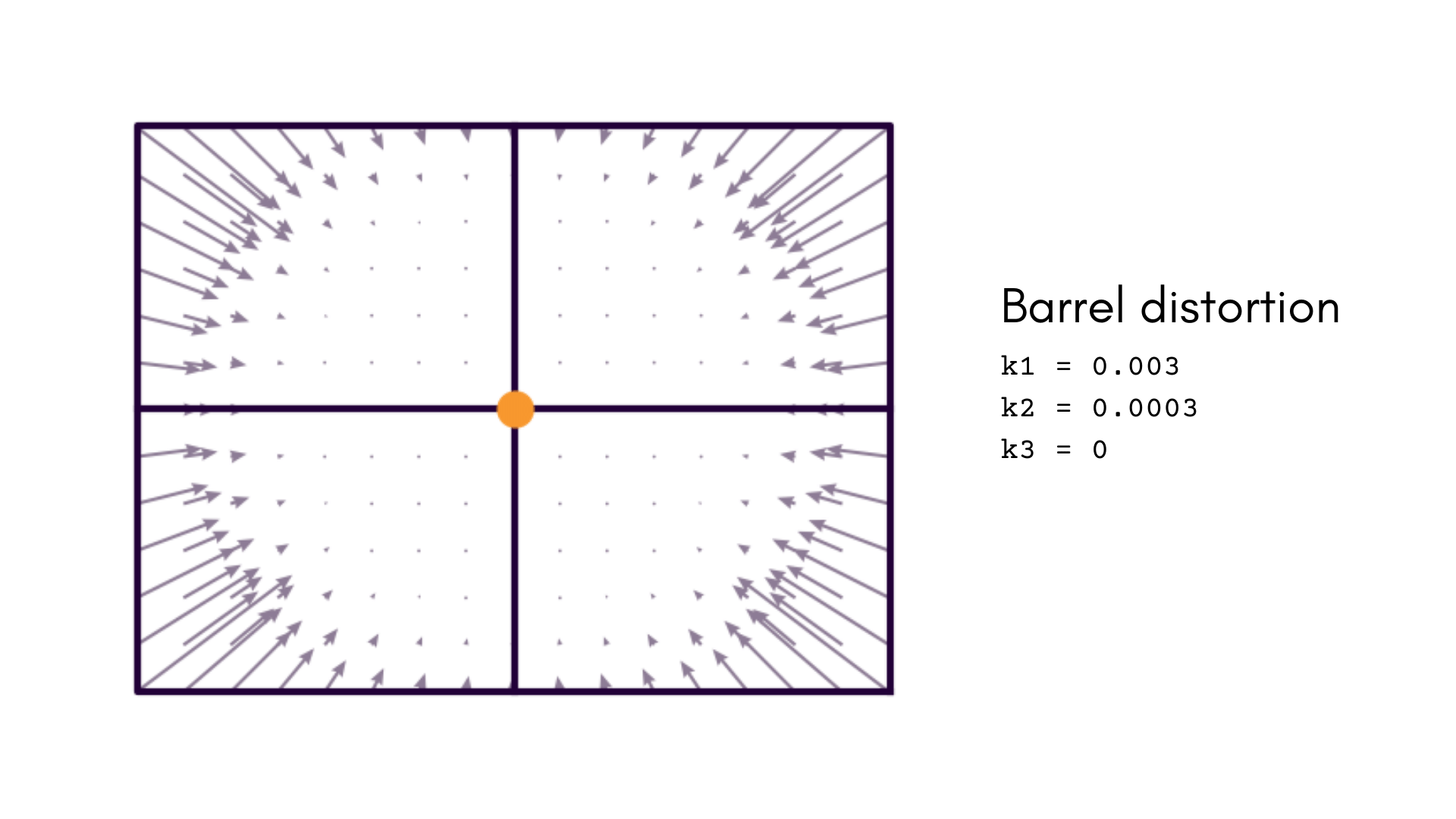 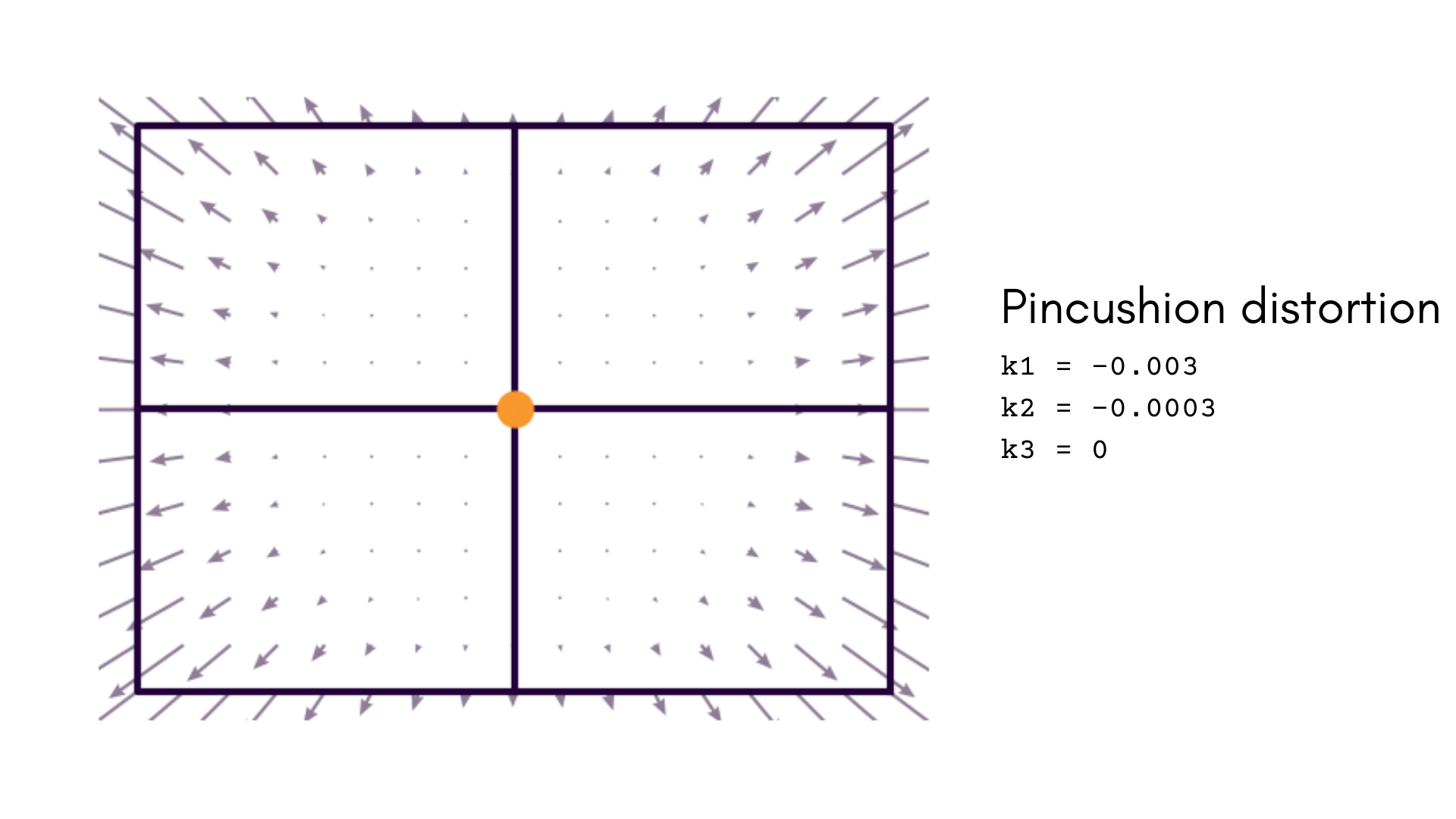 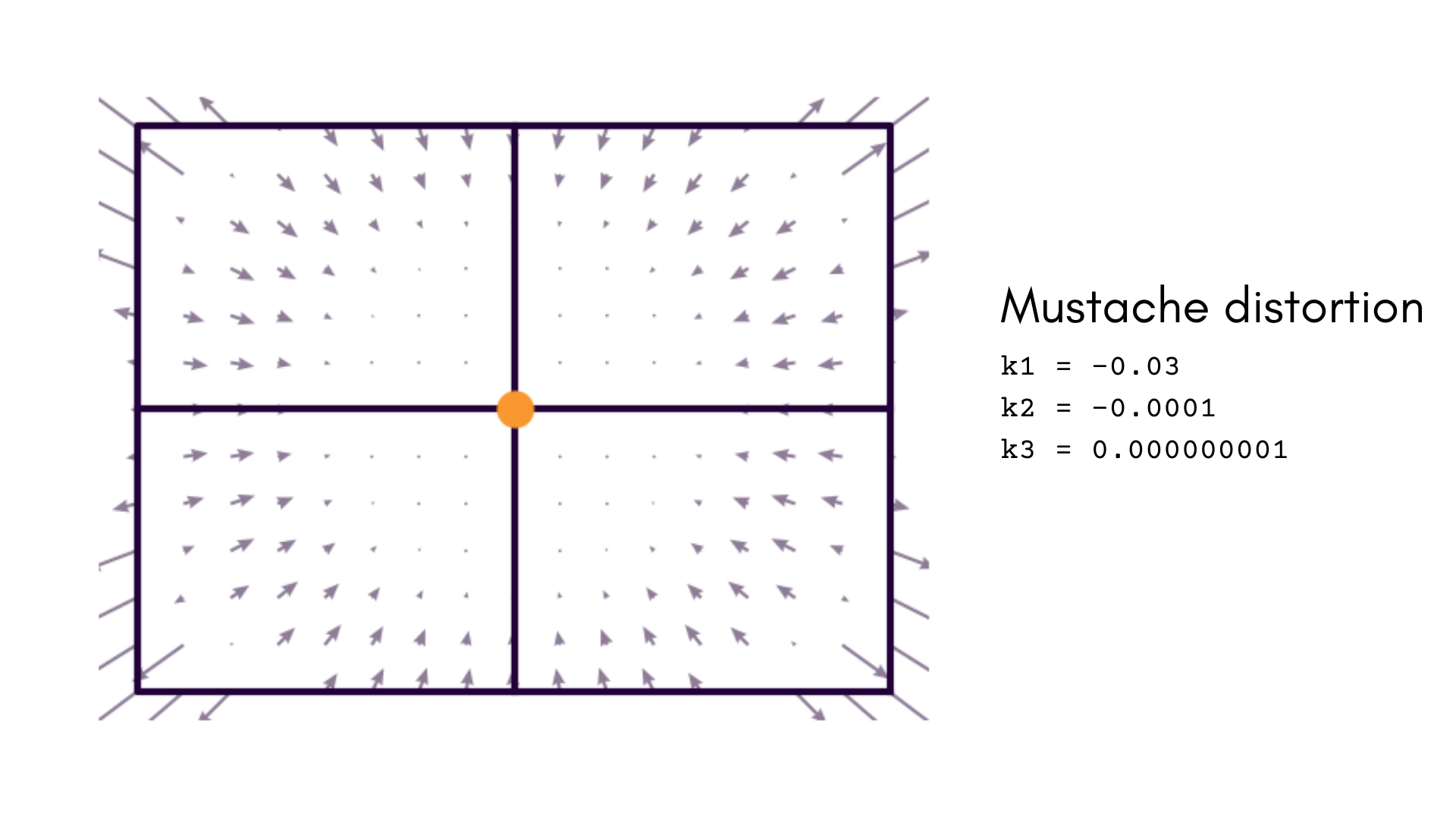 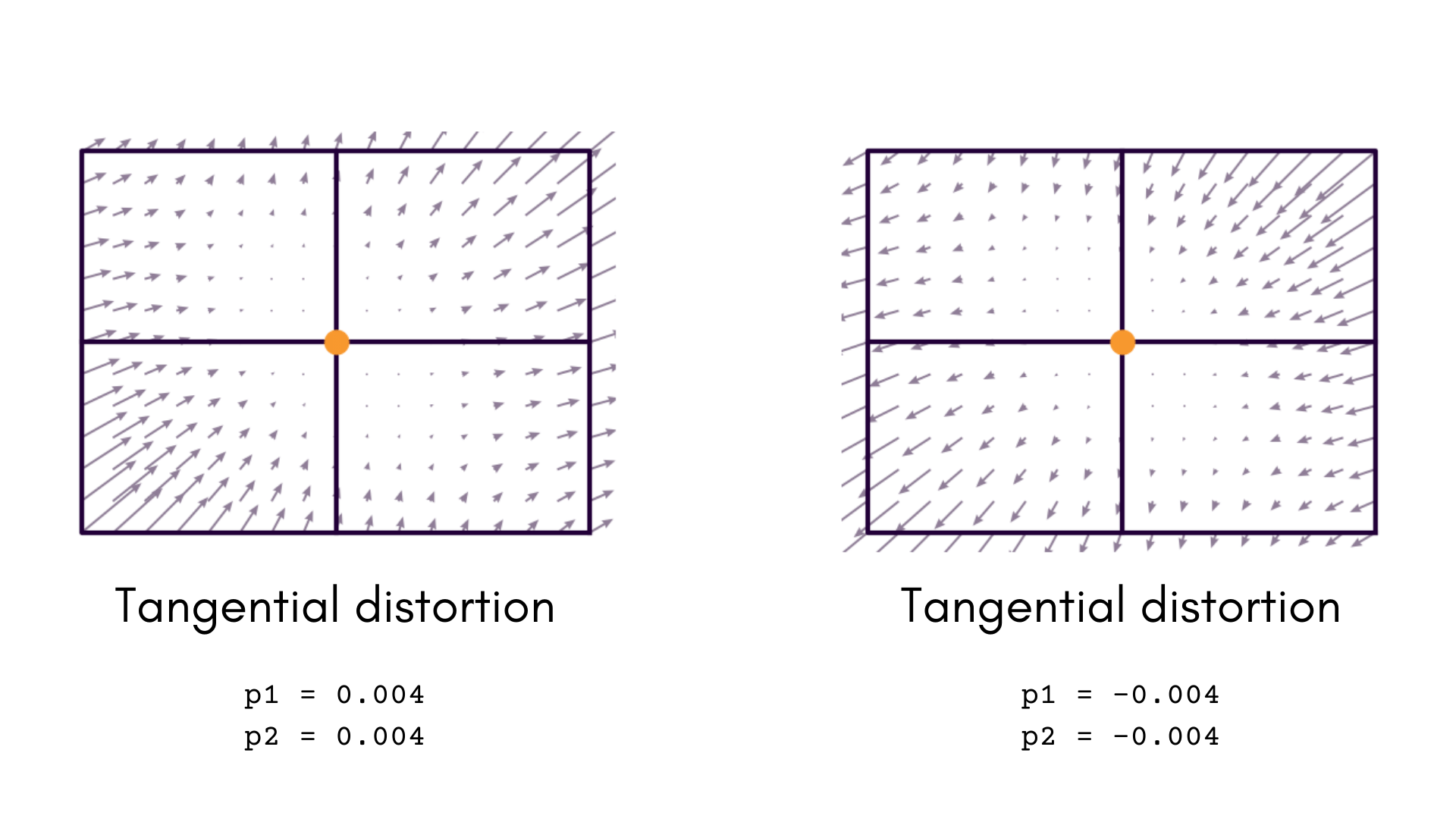 The Brown-Conrady distortion model is useful for cameras that have a standard field-of-view lens. The tangential components of this distortion can often correlate with \(c_x\) and \(c_y\), and so may be left out. However, in cameras with complex lens assemblies (i.e. a compound lens with many parts), decentering distortion is very likely to be a problem and should be measured.

The Brown-Conrady distortion model is originally described in two papers. Read them here and here.

The Kannala-Brandt model is an empirically derived model that is parameterized slightly differently than Brown-Conrady. Instead of parameterizing the radial distortion according to the radial component of the polar image point \(r\), it is instead parameterized in terms of \(\theta\), the angle between the principal axis and an extended ray to the image point.

The Kannala-Brandt distortion model is most useful when used with high field-of-view lenses (typically greater than 90° FOV). Smaller field-of-view lenses are better served by the Brown-Conrady model, as it is conceptually simpler and tends to reduce projective compensation.

Only the first four terms of this expansion are modeled. Symmetric terms beyond \(k_4\) are seldom used and are typically insignificant.

As with Brown-Conrady, this is often broken into:

The Kannala-Brandt distortion model used in the Tangram Vision Platform is originally described in this paper.

Why only symmetrical distortion? We do this merely because the full 23-parameter model is often overkill (and the original paper states as much!).